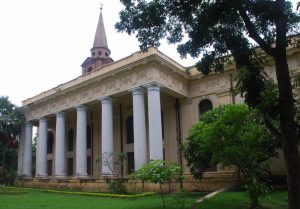 St John’s Church was built by East India Company after Calcutta became Capital of British India. It is situated on the north west corner of Raj Bhawan – The Governor’s House.  It acted as Anglian Cathedral till 1847 and was known as Saint Paul’s Cathedral.

The construction work started 1784 and ended in 1787. The cost of construction at that time was Rs 30,000/-. It is third oldest church in Kolkata after Armenian Church and Kolkata Mission Church. It was built on the land given by Maharaja Nobo Kishan Bahadur of Shobhabazar Raj Family. Founding stone of this was put by Lord Warren Hastings on 6th April 1784. The architect of the structure was Sir James Agg. This is also called “Pathurer Church” (Stone Church) by locals. Its is made by the stones from ruins of Gour Kingdom from Central Bengal. Stones from Gour were getting shipped and were robbed. Afterwhich, stones were taken there for building the church.

The Church has a beautiful interior, made up of stones. Its walls have many Memorial tablets. The front of the church has old piano. In one of the rooms, you will find Warren Hastings’ chair kept inside a glass cubicle.

The compound of the church has some of interesting historical monuments. First to quote is Monument Of Black Hole. It is built in memory of survivors of the incident. The incident dates back when Nawab of Bengal – Shiraj Ud Daulah – captured British soldiers in the hottest month of June and put them to a small prison. Next day morning, when prison doors were opened many British soldiers died due to heat. However, this is a controversial event as per few schools of thought. Previously this structure was located in the place of occurrence of the incident – which was thought to be near General Post Office in Kolkata. In 1940’s when Independence movement was on peak, this was brought to the current location. It was done after protest led by Netaji Subhas Chandra Bose.

Church compound also has Rohilla War Memorial, which the marks sacrifice of British soldiers during war between Rohilla and Nawab of Awadh. It may be noted that British backed Nawab Of Awadh in this war.

Mausoleum of Job Charnock is another structure in the premises. Charnock was a trader who came to India. He is known for his efforts to combine Sutanuti,  Gobindopur and Kalikata to form modern city of Calcutta. His mausoleum was made by his son-in-law. Stones for building his mausoleum was brought from Pallavaram near Chennai. It was known as Charnokite. It also contains Grave of Charnock’s wife and his first born daughter.

One more Grave worth mentioning is of Mrs Francis Johnson who was known as Begum. She was the grand old lady of the city. She lived till 89 years and married multiple times.

One can also find grave of Lord Brabourne, after whose name Brabourne Road in Kolkata was named. One would also find memorial structure for wife of Lord Canning – Governor General Of India. She died of Malaria and buried in a place called Barrackpore. Her name is attached with Bengali sweet “Ledikini” which was dedicated to “Lady Of Canning”. This sweet is made famous by  Bhim Nag-  one of the noted sweet distributor in Kolkata.

At present the church is under Archaeological Survey of India and is protected monument. It is open on all days. There is a mass on every Sunday.

This place is well connected. Nearest metro station is Esplanade. Buses also connect this place to rest of the city. App Cabs like Ola and Uber provides good connectivity as well.

Next time you are in Kolkata do not miss place.